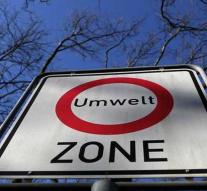 leipzich - German cities are allowed to impose a driving ban on diesel cars. The federal administrative court dismissed the appeal against an earlier ruling by a lower court on Tuesday.

The ruling of the highest federal administrative judge came after the German states appealed against bans imposed by local courts in Stuttgart and Düsseldorf. These were cases submitted by environmental group DUH because of poor air quality in those cities.