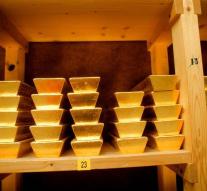 wuppertal - German businessman Günter PUSCHMANN was 1 ton of gold lost, with a value of over 40 million. He died not long ago at the age of 82. For years he was in fierce battle with the Swiss bank UBS, one of the leading asset managers in the world.

The bank kept the gold bars and coins mainly from the former trader in industrial packaging. PUSCHMANN exchanged in 1956 the GDR for West Germany and explained 'the case would be the Russians' enormous apple for the thirsty to. He took the precious metal to banks in Switzerland and Canada, which went up later in UBS, says Spiegel.

PUSCHMANN wanted in 2010 to convert its gold into cash. However, the bank announced that it was not, not grams. It would have been brought to Canada as the counterpart to high losses on foreign exchange transactions carried out the customer. There were no written evidence of it. The Swiss banking ombudsman gave him no chance.

Businessman held until his death maintained that the bank had collected the funds. Günter PUSCHMANN died impoverished, with barely enough money for a grave.