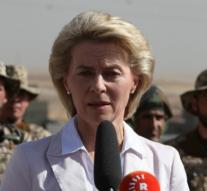 - The German CDU Defense Minister Ursula von der Leyen wants to strictly monitor future soldiers on their backgrounds. They want to prevent radical Muslims use the army for their military training. Parliament examines this week on a special law for this, which should come into effect from summer 2017.

According to media reports, the German Military Intelligence Service would now twenty extremist Muslims have been exposed in the military. Another sixty suspects, who have registered for the military, are checked for their links with Islamic terrorist groups. Thirty veterans are known as fighters to Syria or Iraq traveled.