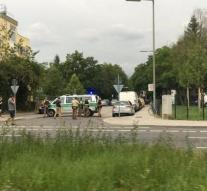 - Munich is Friday, an army unit readied to possibly take action after the shooting in a shopping center in the northwestern district of Moosach.

German Defense Minister Ursula von der Leyen, has confirmed to the Frankfurter Allgemeine Sonntagszeitung the deployment of the armed forces of the options was calculated.

It was in particular a unit of 'Feldjäger' in the Bavarian capital. The Feldjäger in the Bundeswehr a sort of military police. It is not ultimately come from.


A German teenager with no criminal record from Munich Friday shot nine people dead before he took his life. Because of the confusion about the massacre, was feared for some time that there were multiple offenders on the road and there may have been a terrorist attack. That was not the case.

Chancellor Angela Merkel and Interior Minister Thomas de Maiziere on Saturday praised the police in Munich.,, They were in the best sense of the word, the helpers and protectors of citizens. '' De Maizière's Saturday afternoon went to Munich with its Bavarian colllega Joachim Herrmann to visit the scene of the shooting.