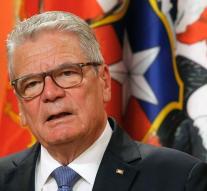 - Germany is officially apologize to Namibia because of genocide, known Namibian genocide early last century. The German Foreign Ministry announced Wednesday that the two countries are talking about a government statement and that probably completed before the end of the year.

Between 1904 and 1908, when Namibia was a German colony, German soldiers murdered tens of thousands of members of the Herero tribes and Numa. According to the German department talking about the governments issued a joint statement in which the murders are mentioned explicitly genocide or genocide. Federal President Joachim Gauck has had more than officially on behalf of Germany too will express his apologies.

The mass murder, causing an estimated 75 000 people died, has been recognized by the UN as the first genocide in the last century.