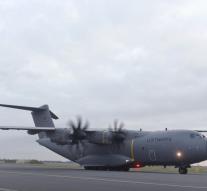 - The German Air Force has for the first time actively participated in the struggle against Islamic State (IS) in Syria. A tanker aircraft provided two jet fighters of the coalition that is fighting against the extremists of fuel.

According to German media unit was five o'clock in the air. Which country's warplanes were is not known.

The German Bundestag decided earlier this month to take part in military operations against terrorist groups in Syria. The country, which include six Tornado reconnaissance aircraft and 1,200 military commitment, self will carry no airstrikes.

Netherlands has yet to decide whether it will take part in military action against Syria in IS.