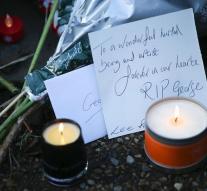 hilversum - The public broadcaster spends on radio and television attention to the death of George Michael. In the Top 2000 Radio 2, he passes these days eleven times. On TV is Monday Top 2000 a gogo (NPO 3, 19.30) adjusted. So you can see a clip of Michael and focuses on an interview with presenter Gerard Ekdom about the death of the pop artist.

Also co-host Gijs Staverman grew up with the music of Michael and calls him his childhood idol. Handsome ' I think he still has reinvented himself musically. Staverman calls the album Faith in 1987 showing the hit I Want Your Sex and the Older album from 1996 as a major turning points.

Fans react to the Top 2000 website with texts like 'My teenage idol... no wallpaper was more to see in my room, 'came too late in the closet, and now much too early in the coffin. Going to miss him, 'and' pop icon, veeeel died prematurely, support for all the fans. ' 'On Christmas Day polite George Michael literally Last Christmas'.

The single with a double A-side 'reached the second place in 1984. When Christmas was over, disc jockeys turned the picture around and Everything She Wants they extended the success of several weeks. Four years later, in 1998, Last Christmas was rereleased and a modest hit in the Dutch Top 40.\n  \n  \n   advertisement

In the Top 2000, traditionally broadcast in the last week of the year, George Michael is represented with eleven hits. With Wham! (Last Christmas, Wake Me Up Before You Go-Go), with Queen (Somebody To Love), by Band Aid (Do They Know It's Christmas) and Elton John (Do not Let The Sun Go Down On Me). He scored six solo in the list of NPO Radio 2: Careless Whisper, Cowboys And Angels, Jesus To A Child, A Different Corner, Father Figure and Faith.

The Top 2000 Cafe at Sound and Vision in Hilversum is working on a wall are showing the deceased musical heroes of 2016. Besides George Michael that, among others, Prince, David Bowie, Leonard Cohen, Glenn Frey and Rick Parfitt.

Also, listeners can respond to Radio 10 on the death of Michael. Moreover, Monday is the day of Last Christmas by Wham! run as uuropener. As a tribute to the singer Radio 10 also launched a digital music channel: A Tribute To George Michael.