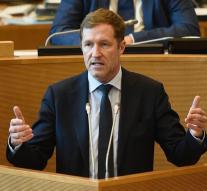 ottawa - Canadian Prime Minister Justin Trudeau had sat a false start, but now he's left yet in the presidential plane from Ottawa to sign the trade agreement CETA in Brussels. Trudeau was already all set to sign the controversial treaty, but technical problems threw a spanner in the works. According to the Canadian news site CP24 turned the plane shortly after takeoff back to the airport in Ottawa because of mechanical problems on the wings.

Trudeau met European leaders Sunday in Brussels to sign the free trade agreement between the EU and Canada. The treaty was negotiated for seven years and especially the last stage was very difficult, then refused to sign the Walloons in Belgium. Ultimately, the treaty was adapted, and the Walloons Friday were still agree, much to the relief of Canada.