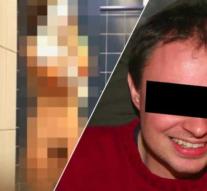 ghent - The 41-year-old Mike D., who is suspected of being the peeper of Ghent, turns out to be the father of a daughter, IT specialist and a popular guitarist.

Mike was arrested yesterday in Zwijnaarde. The police think they have the man who has installed cameras and filmed women in the shower and then put the images online.

The suspect also turns out to be youth coach of a Ghent martial arts club, where two women became victims, writes Het Nieuwsblad.

'It will not work. It will not be someone with us anyway? 'At the Ghent martial arts club where Mike D. has been a youth coach for the last year, they were not worried about it yesterday morning. After they learned on Sunday that two of the club's ladies had been filmed under the shower of the sports complex of Ghent University HoGent, the club management went to the police. 'To file a complaint. '

But the voyeur, who called himself dgreedb on the internet, had in the meantime given much of himself. That he had made the video on May 22 last year. That he was a member of the club. That he had been training that day, but had left ten minutes before the end to hide in the women's changing rooms.

'I would not be able to figure out who it is with the best of the world', the chairman responded this weekend. 'I hope they find that man. Because he needs help: that guy is sick. '

At that time, the Ghent criminal investigation had a suspect in the cell in silence. Sunday evening they picked up a 22-year-old young man from De Pinte. Someone from the vicinity of the victims, that's the way it sounds, whose initials were to dgreedb. But Mike D. unwittingly gave that young man an alibi. On Monday morning he logged back to the infamous website at 7.36 am where he had previously posted his videos. He logged in again at 1:00 PM. Perhaps he wanted to remove some more images, in order to erase his tracks. His Facebook and Twitter page was also deleted yesterday. Ironically, he drew attention, according to Het Nieuwsblad.

Mike D. is the father of a daughter, and lives separately from his ex-wife. He is a popular figure in Ghent's nightlife. As a guitarist he stood at the cradle of a well-known and popular Ghent rock band. He was eventually expelled because he did not attend the rehearsals enough.

'Mike was always very serious,' responds a band member. 'Too serious, almost. If the men were already talking about the clean lady, he would not join. '

The employer of Mike D., a small Ghent computer company, reacted surprised yesterday afternoon to the news of his arrest. 'He did not come to work today, but that was not abnormal in itself. '

Mike D. also made victims there. He secretly made movies of the secretary, and of another woman he called his 'crush'.

In total, at least four women have filed a complaint with the court, because they think they were filmed by Mike D. and then were put on view.