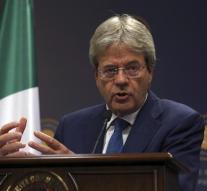 rome - The Italian Foreign Minister Paolo Gentiloni is likely to be the new prime minister of Italy. Which reported Italian media after it became known that Gentiloni has been invited by President Sergio Mattarella for an interview Sunday.

He would be the successor of Matteo Renzi who last week submitted his resignation. He did so after losing in the referendum on reforms of the Constitution. Renzi had its fate linked to the outcome.

It is expected that Mattarella Gentiloni asking to form a new government.