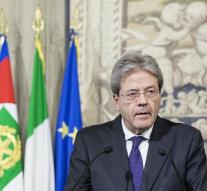 rome - The new Italian Prime Minister Paolo Gentiloni comes with much the same cabinet by. The successor Matteo Renzi, who stepped down after losing a referendum on the constitutional reform, presented his new team of ministers Monday with President Sergio Mattarella, and the members were sworn in. The House of Representatives and Senate have Tuesday and Wednesday still express their faith.

Gentiloni chose Angelino Alfano as his successor in the Foreign Office. The Social Democrat Marco Minniti, the man responsible for Home Affairs. Important reappointment of Pier Carlo Padoan was as Minister of Economic Affairs. He has to more to prevent the large bank Banca Monte dei Paschi di Siena collapses under its bad loans.

Gentiloni problem may be that a small center-right party that stood behind Renzi, now doubts about the continued support of the government. That would make it difficult to find a parliamentary majority and early elections, possibly making necessary in June 2017. Many parties wishes elections.