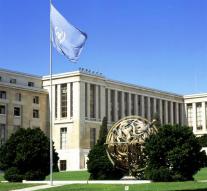 geneve - Police in the Swiss city of Geneva is a manhunt started accomplices of the terrorist attacks in Paris last month. There were tips received that alleged terrorists are in the city.

The Geneva police has been reinforced by units from other parts of Switzerland and is in a heightened state of alert. The BBC reports on the authority of a security guard at the United Nations that the police are looking for four men. UN headquarters in Geneva has been more surveillance in connection with the manhunt.