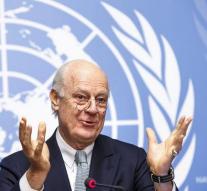 geneve - The special envoy of the UN for Syria, Staffan de Mistura, speaking Friday in Geneva a delegation of the Syrian government of President Bashar al-Assad. That said, his spokeswoman said.

That must be the starting point of a peace conference to help end the bloody civil war in Syria. The peace talks would begin on Monday, but disagreement over who is allowed to participate, which impeded.

That disagreement still exists. But the UN did not want to postpone again the consultations. The organization apparently hopes that the invited parties will soon come in anyway drip. Crucial participants have objected to the participation of certain parties that they call terrorists.

Saudi Arabia backed by a coalition of opponents of Assad has said not to come as long as places are bombed and besieged.