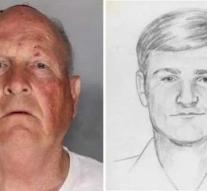 sacramento - The American police have come across the so-called Golden State Killer by comparing DNA of the crime scene with genetic profiles on websites that are used to trace family trees. In this way a match was found with a relative of the suspect, reports the public prosecutor.

How the police used the commercial databases exactly, did not inform the public prosecutor. It raises questions about the legality of the arrest, writes The Sacramento Bee. Usually the police only use DNA databases with data from convicts.

On Wednesday it was announced that former police officer Joseph James DeAngelo (72) was arrested on the basis of DNA evidence. The authorities suspect that he is the Golden State Killer who according to American media would be responsible for at least 12 murders, 45 rapes and 120 domestic burglaries between 1976 and 1986.