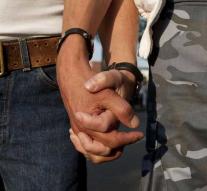 luxembourg - The spouse of an EU citizen of the same sex from outside the EU has the right to stay with his or her partner throughout the European Union. That has been determined by the European Court of Justice.

EU countries decide for themselves whether to allow a gay marriage, but they can not refuse a homosexual marriage partner from outside the EU a permanent right of residence if the marriage took place in an EU Member State, according to the Court of Appeal. The free movement of persons is decisive. The concept of spouse is 'gender neutral' in European law.

The court ruled in a case where the Romanian authorities refused the American husband of a Romanian husband a residence permit. Romania does not recognize gay marriages.

The couple had first lived together in the US and married in 2010 in Brussels. Two years later they submitted a request to establish Romania. After the refusal, they filed a case for discrimination that eventually ended up at the Romanian Constitutional Court. That presented the case to the EU court.

' Great news and a milestone for rainbow families across Europe '', responds D66 European Parliamentarian Sophie in 't Veld. 'Member States that do not recognize same-sex marriage also have to recognize the rights of LGBTI couples from now on. Now politicians have to put butter in the fish and ensure that the rights of rainbow families are actually recorded in laws. ''