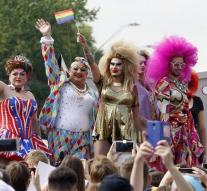 kiev - Politicians and foreign diplomats participated in a gay pride in Kiev on Sunday. According to the organization, about 10,000 people participated in the march. There was a lot of police on duty, who had little to do, but the journey went without significant incidents. However, there were two hundred people protested, tens of people tried to break through the security cord.

The pro-European government of Ukraine has recently been committed to the rights of gay community, to move closer to the European Union.