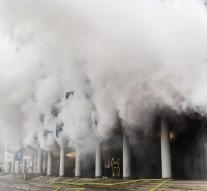 hannover - An explosion of a battery of an electric bike on Tuesday caused a major fire in a car park in the center of the German city of Hanover.

No one was injured. The damage amounts to about half a million euros.