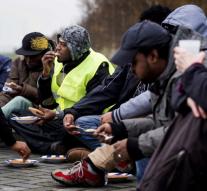 sarajevo - In a joint action of the police in four countries, a gang of smugglers rolled into eastern Europe. The criminals were recruiting women and forced to go to work in prostitution.

The driving force behind the police action was the Bosnian investigation agency SIPA. That worked with the authorities in Serbia, Austria and Germany in order to identify the gang. Eight gang members were arrested in Bosnia and three in Serbia.

Sitting together more than a dozen people fixed. The women were put to work in Austria and Germany. The gang also forced women from Ukraine in prostitution in Bosnia.