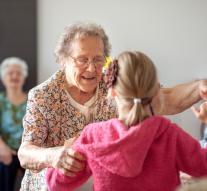 - In the run-up to World Alzheimer's Day (September 21), the Utrechtse gaming company Active Cues launches a special action on September 1 to ask for dementia attention. Healthcare professionals and relatives are encouraged to dance with people with dementia.

By sharing a video of these special moments on social media, they can then turn on a Tovertafel. This Active Cues Magic Table is a playful care innovation that projects interactive games on the table with the aim of stimulating movement and social interaction with people in later stages of dementia.

'In care homes, 90 percent of residents with dementia suffer from apathy,' says Hester Le Riche, who devised the Tovertafel during her PhD research at TU Delft. 'Often they are bored, feel lonely or stare out for themselves. With this action, we want to create as many beautiful moments as possible for people with dementia, by which we break that apathy and just give them fun and contact with others. '

The idea arose from a moving video on YouTube showing how a boy dances with his grandmother. The old woman, suffering from dementia, enjoys being visible from the moment. 'From such special moments, how short they last, there can not be enough,' says Le Riche. 'A dance is binding, puts you in motion and is personal and intimate. Therefore, the assignment is simple: ask someone with dementia to dance and make a short video of, for example, your phone. '

Active Cues action will start on September 1 in the Netherlands, Belgium, Great Britain and Germany. In every country a wardrobe is closed. Participants can post their video on the Facebook page 'Tovertafel bij Active Cues' or Twitter with the hashtag #tovermoment until September 17th. On September 21, the winners will be announced.