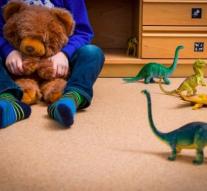 berlin - In the German Lower House, the Bundestag, a playroom is being created. In a room next to the meeting room, a carpet of colorful characters is set on play objects. There is also a seat cushion in the room previously available to the deputy chairman of parliament, said Der Spiegel Wednesday.

The playroom is intended for children of parliamentarians. They can wait for their parents to meet after closure of the regular reception.

Initially, the playroom will be opened on a few Thursday nights as of trial from next week. It is an initiative of three 'political' mothers, including the Christian Democratic Ex-Minister of Family Affairs Kristina Schröder. According to Schröder, there have never been so many mothers in the German parliament. There are now over twenty.

The test must indicate whether children come to the playroom. If it turns out to be a success, it will open more often.