Home / Tech / Gamers get their money back 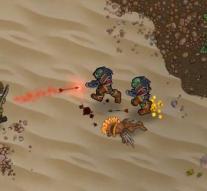 - Unfortunately enough examples of crowdfunding projects that never see the light or disappoint as they do. Often people whistle for their money. Mage Pixel Games, the studio behind Hero's Song, fortunately different approach.

Unsuccessfully tried to raise money for Pixel Games Mage Hero's Song via Kickstarter. Through IndieGoGo was again a bold attempt, but the collection yielded less than expected. Yet he managed eventually to release Hero's Song in November for Steam Early Access. Unfortunately, sales lagged, so the developer is forced to close the doors.

'With a heavy heart I must announce that Mage Pixel Games will close and that we continue the development of Hero's Song. This past year our team has worked tirelessly on our dream game and with your help and that of investors we have been able to release the game for Early Access. Unfortunately, sales were down on what we needed to continue development. We knew from the outset that most startups do not get it. When indie game studio we hoped to be the exception to that rule, but that turned out not to be so, 'the studio has announced in a statement.

Remarkably Pixel Games Mage succeed yet everyone to give his money back. This applies to people who invested money through IndieGoGo, as the gamers Hero's Song purchased through Steam Early Access. On the studio's website explains how this works.