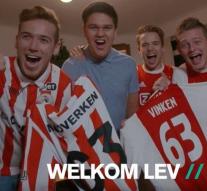 rotterdam - Sparta has strengthened its selection. Not from the Eredivisie team, but from his eSports team, the gamers who come out in their own league, the eDivision. The Rotterdammers are renting the seventeen-year-old gamer Lev Vinken of Ajax this season.

It is known for the first time in the Netherlands that a gamer is hired from another club. Sparta may not say how much money is paid for the rent. Sparta also does not make statements about the money that its gamers deserve.

The eighteen Eredivisie clubs have all attracted gamers who play the game FIFA18 on their behalf. The clubs want to reach a younger audience. Sparta has two gamers under contract. Vinken will play for the Castle Club on the PlayStation. The fast Spartan Frank van der Slot concentrates on the Xbox. The gamers will also come into action for sponsorship activities, as Sparta's face.

The eDivision began last season. Ajax took the first title. The club won all its matches. Feyenoord became second, Heracles third. Go Ahead Eagles ended at the bottom, just like in the Eredivisie.