Home / Tech / Game of Thrones again the most illegally downloaded 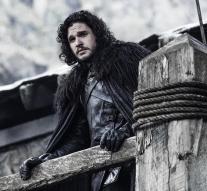 - Game Of Thrones was the most illegally downloaded in 2015. With no less than 14.4 million downloads of the season finale, the HBO series for the fourth year running favorite of Internet pirates worldwide. According to figures from TorrentFreak.


The difference with the competition is high. The most popular episodes of the number two and three, The Walking Dead and Big Bang Theory, downloaded or only 6.9 million and 4.4 million times. Other series in the Top 10 include Mr. Robot, Vikings and Suits.
The total number of illegal downloads is probably much higher, as TorrentFreak relying only on data from the BitTorrent network. Download Sources as Usenet and FTP servers are not included in the figures.
As with previous years, it is noticeable that pirates have a preference for copies of a smaller file size, even though the files of interest in higher quality is grown.
NEW