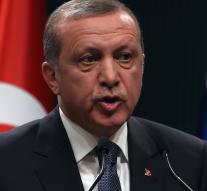 ankara - Nearly 57 million Turkish voters Sunday to elect a parliament again. The previous elections on June 7 did not yield any coalition government. The Party for Justice and Development (AK) President Erdogan lost in June for the first time in thirteen years the absolute majority in the 550- member parliament.

Erdogan thinks he can win back majority Sunday. I or the chaos argues the Turkish leader optimistic. But the polls say he guess incorrectly. The electorate would not crawl back under his wing, but disappoint him like five months ago. Then the AK remains are large but is dependent on coalition partners.

Erdogan's popularity as an economic reformer, political innovator and socially conservative Muslim deteriorates. Foreign policy in the region as well as the peace process fails with the Kurdish PKK extremists and jihadists have early October have committed a bloody attack in Ankara. Moreover, Erdogan's authoritarian tendencies are becoming increasingly visible with the construction of palaces and raids on critical media.

And its greatest strength, the economy, which he brought to fruition, stagnant. Even Finance Minister Mehmet Simsek (AK) lamented recently that all the progress that Turkey has made over the past twelve to thirteen years, threatens to be lost.

Erdogan was in presidential elections last year 51 percent of voters behind them, but in June was his AK Party still only accounts for 39 percent. In order to win more than half the seats in parliament, in the complicated electoral system more than about 41 percent of the votes needed. After the election will have the intended prime minister 45 days to form a government. Erdogan would, according to observers, politically and economically can not make to early elections again. If he gritted teeth forges a coalition with other parties, it is done with its monopoly on power.