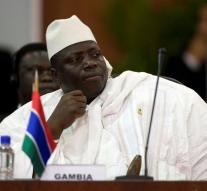 Saidy held the post of Vice President since 1997. According to government sources, the Minister of Education, Abubakar Senghore, submitted his resignation. More likely the Gambian police Ousman Sonko and army chief Ousman Badjie have said they do not take orders from more Jammeh.