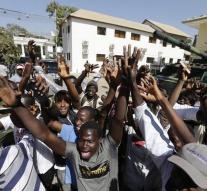 banjul - The Gambian parliament on Tuesday revoked the state of emergency now that the political crisis in the country is averted. The former President Yahya Jammeh had imposed it, shortly before he fled his country to go into exile.

Jammeh lost on December 1 elections in the country with less than 2 million inhabitants of opposition leader Adama Barrow, but refused to resign because his eyes were flawed elections. He demanded an investigation and called last Tuesday a state of emergency for a period of three months.

Eventually Jammeh was Saturday under heavy diplomatic pressure on power. Did he not, thousands of West African troops were ready to oust him.