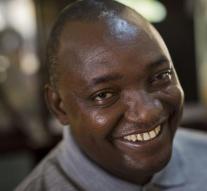 dakar - Adama Barrow, winner of the presidential elections in Gambia, is sworn in Thursday afternoon at 16:00 (local time). Barrow made via Twitter that the ceremony takes place in the Gambian Embassy in Dakar, the capital of neighboring Senegal.

Barrow took in the December elections more votes than Yahya Jammeh, the past 22 years, President of the West African country. Jammeh feels to give up much for his office.

Senegal had previously know the intervention of West African troops as Jammeh would not resign in the night from Wednesday to Thursday at midnight (local time) That deadline has now passed, but still foreign troops have not yet taken action.

According to a senior officer of the secret service, the Gambian police Ousman Sonko and army chief Ousman Badjie said that they do not take orders from more Jammeh.