Home / World / Gambia president should stay on for three months 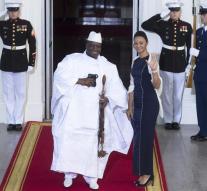 banjul - The National Assembly of The Gambia adopted a resolution which President Yahya Jammeh can remain for three months. It reports the state.

Jammeh lost on December 1 elections in the country with less than 2 million inhabitants of opposition leader Adama Barrow. That would be inaugurated Thursday, but Jammeh refuses to resign.

The president recognized initially his election defeat, but later came back because the electoral commission had identified a number of irregularities. Although the committee there said that they were too small to affect the outcome, Jammeh finds that the Supreme Court should declare the result invalid. The supreme court, however, currently facing a shortage of judges and would only in May can begin with the case.

The president wants to stay on in the meantime. Tuesday, he announced a state of emergency for ninety days. His support in their own ranks crumbling now. Three ministers have resigned in recent days. Thousands of people have fled to neighboring Senegal precaution.