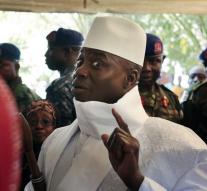 - The president of Gambia, Yahya Jammeh, however, is not reconciled to his election defeat of December 1st. He said Friday on television to wish to organize new elections.

'After thorough research, I have decided to reject the election results. 'According Jammeh said there were serious irregularities during the voting place. 'I recommend new and transparent elections that are chaired by a God-fearing and independent electoral commission. '

Jammeh was, after having committed a coup 22 years in power in the Gambia and ruled the West African country with an iron fist. His election defeat caused great joy among the population. Jammehs regime was accused by human rights organizations of illegally fixing, torture and murder of opponents. The unexpected announcement of the President seems to break an uncertain time for the African country.

Neighboring Senegal called on the UN Security Council, which is a non-permanent member, to meet in an emergency session. The United States condemned to undermine the action of Jammeh as a bad attempt the democratic process and illegally stay in power.

Jammeh had previously admitted his defeat on television and phoned Adama Barrow, the winner of the elections. Barrow, also known as 'no drama Adama ', managed to unite the opposition and defeat Jammeh. The former security guard at a department store in North London is committed to reforming the economy to prevent disadvantaged compatriots continue to seek refuge in Europe.