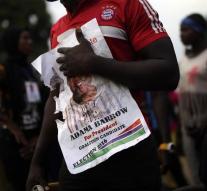 banjul - Gambia has a new president after 22 years. All ruler Yahya Jammeh since a coup in 1994 to power the Thursday lost elections by opposition candidate Adama Barrow. The latter received 263 515 votes, but 212 009 Jammeh, announced the Election Commission of the West African country.

Jammeh (51) ruled the Islamic republic with an iron fist. According select committee Alieu Momarr Njai he conceded defeat. The wait is still on a statement in public and congratulations to the winner.

Jammeh has to step over his own shadow. Earlier this week he said that only God could take him off the power. He also said he would continue to be a billion years in power. Opponents he imprisoned according to human rights groups, torture or murder.