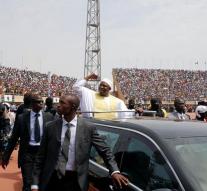 banjul - After months of uncertainty, tens of thousands of residents from Gambia Saturday celebrated the inauguration of the new president Adama Barrow. An estimated 25,000 people gathered in a stadium in the capital Banjul. The presidents of the neighboring countries, Ghana, Liberia, Senegal, Sierra Leone, Ivory Coast and Mauritania were present.

Due to the tense political situation in his native Barrow was sworn in mid-January at the Gambian Embassy in Senegal. The return of former opposition leader in the small West African country late last month, was preceded by a power play of his predecessor Yahya Jammeh.

Jammeh lost the December 1 elections, but refused to resign. Eventually he turned to go into exile prepared under heavy diplomatic pressure. Thousands of West African troops were ready to oust him.

On Barrow rest now high expectations. The new president promised more liberties. He also wants to reverse many decisions of its predecessor.