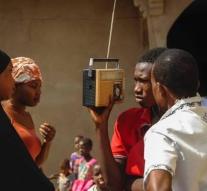 dakar - The former president of Gambia, Yahya Jammeh, is expected to leave on Saturday his country. There are conflicting stories circulating about where the former leader is in exile, say sources close consultation with Jammeh.

The leaders of Mauritania and Guinea Friday traveled to Gambia to mediate. Those conversations revolved among other things, will be asked if Jammeh amnesty for alleged crimes committed during his rule. Some Gambians Saturday reacted angrily to the former leader still get the chance to negotiate about.

Jammeh, who came to power in 1994 after a coup, announced on the night of Friday to Saturday his departure. He had initially refused to resign after election defeat, but thought better of it a regional troops invaded his country.