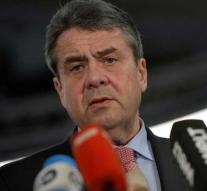 munich - The German Foreign Minister Sigmar Gabriel believes that the sanctions against Russia can be relaxed if a cease-fire comes into force in eastern Ukraine.

Gabriel called it 'not realistic' to insist on the full implementation of the Minsk peace agreement without releasing part of the sanctions.

According to the German minister, there are still a number of fundamental differences about the Russian proposal to deploy UN peacekeeping troops in eastern Ukraine. Yet he called it 'one of the few realistic options' to smooth the situation in the region.