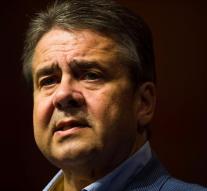 berlin - The celebrated performance of former President Barack Obama in Berlin was given a follow-up on Friday with criticism of his successor Donald Trump. The German Foreign Minister Sigmar Gabriel approved the policy of the current US president. He claimed to increase defense spending to 2 percent of gross domestic product.

'What has to change in Europe and in the world is that we must finally talk again about disarmament, denuclearization and control of the armor,' said Gabriel with loud applause in the capital. 'There is no stability and peace alone through military action, but through development aid and crisis prevention. ''

SPD Gabriel added that he would not even know what the German army should do at 70 billion euros a year. His party fellow Martin Schulz, Chancellor's candidate, condemned the aggressive way of dealing with Trump with Germany and Europe during the NATO summit. 'Such a degrading treatment must be rejected, so you do not have to accept that. ''