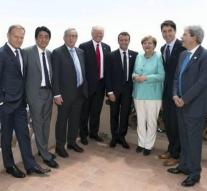 taormina - The major industrialized countries threatened Russia with further sanctions. In the final statement of the meeting of the G7 countries in Sicily, they insisted on the implementation of the Minsk peace agreement for eastern Ukraine.

'Sanctions can be abolished if Russia has fulfilled its obligations,' said the statement. 'But we are also prepared to take further restrictive measures to increase Russia's cost, as the situation requires. '

Efforts to resolve the conflict between the pro-Russian separatists and the Ukrainian government forces have been shed for years. As a result of the annexation of the peninsula Crimea, Russia has been set in the G8 since 2014. The G7 countries France and Germany mediated in the Ukraine conflict, but so far without unprecedented success.