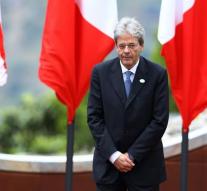 taormina - In response to the attack in Manchester, the leaders of seven major industrialized countries have signed a joint declaration on combating terrorism. 'This is a powerful message of friendship, proximity and solidarity with Great Britain,' said Italian Prime Minister Paolo Gentiloni on Friday at the G7 summit in Taormini, Sicily.

There was no unanimity about the Paris climate agreement. US President Donald Trump was the only one in the wrong. He does not feel bound by the 2015 commitments. Attempts to persuade him failed. Gentiloni was nevertheless optimistic. 'All others have confirmed that they are fully in agreement. We are convinced that, after internal considerations, the US will also commit itself to it. ''