Home / World / G20 in terms of trade, climate and protest 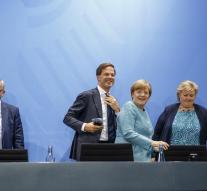 hamburg - The leaders of the nineteen richest countries in the world plus the EU meet in Hamburg for the G20 summit on Friday and Saturday. Chancellor Angela Merkel invited the Netherlands as a host country. Prime Minister Mark Rutte takes over ministers Jeroen Dijsselbloem (Finance) and Bert Koenders (Foreign Affairs).

The Dutch delegation flies early on Friday morning, because Rutte can not join the first workshop in the exhibition complex as a non-member of the G20. The Prime Minister has bilateral meetings with Indonesian President Joko Widodo and Prime Minister Lee Hsien Loong of Singapore. Singapore is also a host country.

At 12.30, Rutte is in family photo and from 13.00 at the work lunch, where growth and trade are discussed. At 15.30 a session on sustainable development, climate and energy follows.

From 20.30 there is a dinner and a concert in the brand new Elbphilharmonie where Beethoven's Ninth will be heard.

The summit will resume on Saturday at 10.30 with subjects Africa, Migration and Health. Rutte gives an introduction to this last theme. In the morning he speaks with Australia's premier Malcolm Turnbull.

After the work lunch at 13.30, the summit ends at 15. 15 hours with a final statement. Around the top are numerous protests from anti-globalists and capitalists organized.