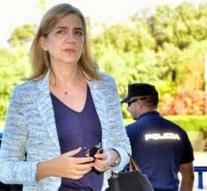 - How should we proceed with Princess Cristina? The Spanish media ask this question after her husband Iñaki Urdangarin has been sentenced to five years and ten months in prison.

King Felipe's sister has been out of favor with the royal family for almost eight years, who, in particular after Felipe's appointment as king, keeps maximum distance to the princess and her husband for fraud, money laundering and tax evasion.

Felipe deprived his sister of the title 'Duchess of Palma' and insisted on her to give up her claims to the Spanish throne. Cristina, who believes in the innocence of Iñaki, has stubbornly refused, but since the first criminal investigations started her family moved to Geneva, far away from the Spanish media. There, the princess, who turns 53 on Wednesday, is the breadwinner for the family.

The question is whether it will move closer to Spain when Iñaki (50) disappears behind the bars, so that prison visits are easier. It is not yet known where he should serve his sentence and whether he might receive a respite by appealing to the Constitutional Court.

Friends of Cristina are worried about her state of mind, although she does not show anything out of her emotions. 'That is how she was brought up', the newspaper El País thought Thursday.