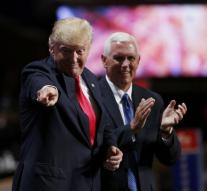 - Donald Trump with his comments on the protection of other NATO countries caused a stir, both among allies of the United States within the Republican Party.,, Such statements make the world more dangerous and the US less safe '', for example, said Republican Senator Lindsey Graham. According to him, especially the Russian President Vladimir Putin are happy.

In an interview with The New York Times, Trump drew the main principle of NATO- that Member States protect each other at all times when they are attacked- in doubt. The presidential candidate believes the US should protect only countries that,, fulfill their obligations to us. ' That he was referring for example to the appointment to spend at least 2 percent of gross domestic product on defense. Many countries, including the Netherlands, spend less money on their militaries.

Defense Secretary Michael Fallon NATO ally Britain said that protecting others,, is an absolute obligation. ' The US Secretary of State John Kerry felt himself called to respond.,, This government is just like any other Republican and Democratic governments fully committed since 1949 to the NATO alliance and our security obligations under Article 5, '' he said. In that article, the agreement to protect each other.