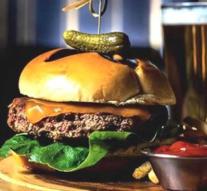 wellington - The vegetarian burger that the national New Zealand airline Air New Zealand serves on the flights from Auckland to Los Angeles is not popular everywhere. There has been a stir over the fake meat manufactured in California from plants.

Acting Prime Minister Winston Peters is also indignant that 'the airline company that was once founded by the taxpayer and rescued in 2001 now offers American art meat. 'The airline should instead advertise the excellent meat that the country produces and exports.

Parliamentarians and presidents of associations of entrepreneurs are complaining in the local media of the 'impossible citizen' of Air New Zealand. 'It is a slap in the face of the meat producers,' said an angry chairman. And parliamentarian Nathan Guy states that the airline New Zealands should promote 'best products, because we make the most delicious steaks and lamb products from around the world. '