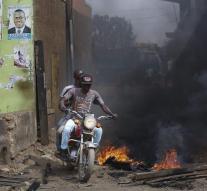 kampala - President Yoweri Museveni of Uganda seems almost certainly a new term. With about half the votes counted, Museveni stands at 60 percent. But his main opponent, Kizza Besigye, a fraud was committed on a large scale.

Besigye, who stands in the counts on 35 percent of the vote, was Friday arrested for the third time in a week. Shortly hold a press conference before his arrest wanted the opposition leader, in which he would announce the results of polls that had kept his party FDC itself.

Earlier this week, leaving the police shock grenades and tear gas to break up a protest by supporters Besigyes.