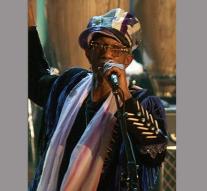 - Bernie Worrell, keyboardist of Parliament-Funkadelic and Talking Heads, is at the age of 72 deceased from cancer. Said his wife Judie Friday.

Worrell formed in the early seventies with George Clinton's Parliament-Funkadelic group.,, Bernie's influence and contribution, not only to funk, as well as rock and hip hop, will be felt forever, '' Clinton dropped in a reaction that Billboard.

At the conservatory in Boston Worrell made acquainted with the electronic classical music of Emerson, Lake amp; Palmer. He became captivated by the sounds Keith Emerson shrugged off a Moog synthesizer. He bought a Minimoog and began to experiment.,, That's basically all I do: I turn the knobs until it does what I want, '' he told Music Radar.


After Parliament-Funkadelic had fallen apart Worrell continued to cooperate with solo albums of Clinton. Later he went on a request from David Byrne and Chris Frantz to join their New Wave group Talking Heads.