Home / World / Funeral will be carnage in Baghdad 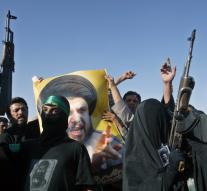 baghdad - The funeral of a pro- government combatant in the Iraqi capital Baghdad Friday ended in a bloodbath. Because a terrorist blew himself up in the company, were eighteen visitors killed and 41 wounded there.

Which have informed the police and medics. The attack was during the funeral of a Shiite fighter in southwest Baghdad. The responsibility is not claimed, but the suspicions go towards the Islamic State.