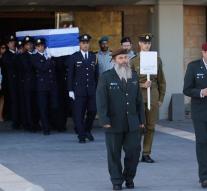 jerusalem - In Jerusalem, the funerals of former Israeli President Shimon Peres began. The coffin with his remains by a military honor guard of parliament supported the national cemetery on Mount Herzl in Jerusalem.

Peres died Wednesday at the age of 93 from the effects of a severe brain hemorrhage two weeks earlier. At the funeral ceremony are among others the US President Barack Obama and former President Bill Clinton traveled to Israel. On behalf of the Dutch government Prime Minister Mark Rutte attends the funeral at.