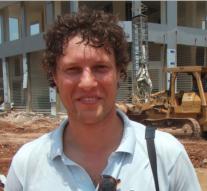 amsterdam - The funeral service for Jeroen Oerlemans will be held Thursday in the Zuiderkerk in Amsterdam. The photographer arrived Sunday in Libya to life after he was shot by a sniper of the terrorist movement.

The Oerlemans woman has asked those interested to come as a colleague or friend, and for the sake of the kids want to spend any media attention to service. Oerlemans leaves three children after four, seven and nine years old.