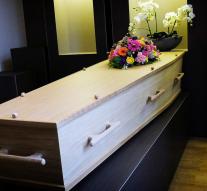 copenhagen - A funeral businesswoman in the Danish capital Copenhagen plays in an original way in the local passion for cycling. Sille Kong City brings the coffin namely a converted bike to the cemetery.

According to the inventive Danish (40), she has been around 25 times a bicycle taken away a coffin. And it makes her nothing that the ride through the city properly takes some energy. " It's just something special for this bike ride ", she says.