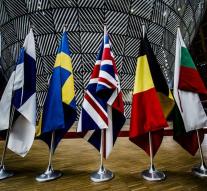 brussels - The EU summit held in Brussels on Thursday and Friday has been filled to the ridge. Central is the protection of Europeans: against terrorist threats, illegal immigration and uncontrolled globalization.

During the first working session, leaders speak from 15.30 on security, defense and counter-terrorism. While enjoying dinner, the climate agreement of Paris and relations with the US, Turkey and China are discussed, as well as the situation in Ukraine. Against the cake, Prime Minister Theresa May may explain the British position in the brexite negotiations.

After dinner, discussions are continuing without May, with leaders expected to agree on the procedure for moving the two EU agencies in London to other Member States.

Friday, in the presence of President of the ECB, Mr Draghi will review the state of the economy and discuss trade policy. After a session on migration, with an emphasis on Libya, the end of the summit is a discussion about a digital vision on Europe.

Premier Rutte represents the Netherlands both days, but Friday also Luxembourg. Premier Xavier Bettel is then in his own country for the national holiday.