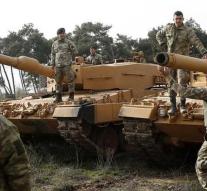 ankara - Some 25,000 fighters from the Free Syrian Army (FSA) support the Turkish offensive in northern Syria. The insurgents want to recapture places that fell into the hands of the Kurdish YPG militia some two years ago, says a senior FSA official.

Rebel leader Yasser Abdul Rahim said that the FSA fighters do not intend to enter the city of Afrin. 'We intend to surround the city to ensure that the militia have to leave,' he said. 'We are not going to fight in the city itself because we do not have a problem with citizens. '

The rebel leader claimed in a telephone interview with Reuters that the FSA, supported by Turkey, initially wanted to recapture sixteen Arab sites on the Kurdish militia.

The rebels accuse the YPG of having expelled Arabs from the villages. It would involve tens of thousands of people. The Syrian-Kurdish militia denies those accusations.