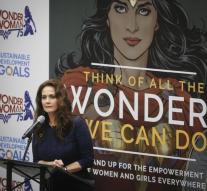 - The United Nations has the 75th anniversary of comic book character Wonder Woman as an opportunity to appoint her as an honorary ambassador for the empowerment of women and girls. Both within the country and abroad organization is critically commented on the appointment, which many believe should have gone to a real and less sexualized woman.

Friday's ceremony was boycotted by some fifty UN staff, who demonstratively turned their backs.

The UN would like to use the image of Wonder Woman on social media to promote women's empowerment.

Honorary Ambassadors are fictional characters, as previously Winnie the Pooh was ambassador for the friendship and Tinker Bell for the environment.

UN personnel is a petition started to ask the Secretary-General to reconsider the appointment. The petition follows the appointment of former Portuguese Prime Minister Antonio Guterres new secretary-general after fifty countries and many international organizations had lobbied for a woman at the highest diplomatic post in the world.