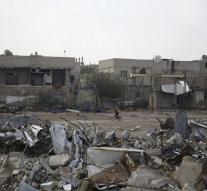 geneve - Certainly 120,000 people since the beginning of this month, beaten on the run in the Syrian provinces of Aleppo, Hama and Idlib. That said Monday the United Nations, with which they have doubled over the previous estimate of 50,000.

Most refugees remain near their own region or go to camps on the Turkish border, said a spokesman for the humanitarian coordinators of the UN (OCHA).

The affected region is the scene of a Syrian army offensive. The government army is airborne for roughly three weeks assisted by large Russian air strikes.